I need to start this review off by saying that I have very mixed feelings about ‘Vagabond’. This K-drama, available on Netflix, had a budget of 20 million dollars and is in the top 3 of most expensive Korean Dramas. And you can tell from the start.

The filming took place in several locations; Portugal, Morocco and South Korea. The cinematography of ‘Vagabond’ was really well done. The action scenes were well shot. I love the fact that they hardly used shaky cam, which is not my favorite.

The acting was top notch. During its sixteen episode run we could see some amazing work by Bae Suzy, Lee Seung-Gi, Lee Kyoung-Young and Baek Young-Sik.

For me, the problem starts with the script. Despite having a very interesting plot line, it often felt too slow and too fast at the same time. Though I do have to say that the characters were well written.

The government has to purchase Fighter Jets and two different companies are both aiming to get the contract. Then there’s a terrible plane crash where a lot of people died. One of the companies  owned the plane that crashed while flying to Morocco and it shakes things up the bid for the contract.

Cha Dal-geon, who loses his nephew in the crash (played by Lee Seung-Gi) and Go Hae-Ri, an NIS employee ( played by Bae Suzy) have to work together to find out the truth. But since this is an espionage thriller, things are not as easy as they seem.

There’s a lot of layers to the story, which is great, but often times you could see the twist coming from a mile away. Also, the way the first season ended was just extremely disappointing. It doesn’t matter that we might get a second season, though nothing is confirmed as of yet. It’s just not the way to end a show because hardly anything is resolved.

Sponsored by Subway and Lancome

For my feeling there were a bit too many car crashes. There was at least one in every episode for the first seven. Then another thing that bugged me was the amount of product placement. Usually I’m not too annoyed by it, but here you were just sitting on the tip of your chair because something interesting was happening and then you get thrown off when you see the front of the Subway shop. Also the amount of Lancome product placement was just a tad on the nose.

The last cringe I had sometimes, was when there was an almost forced feeling to some romantic moment. They’re talking about governments and conspiracies and then suddenly they’re in each other’s bubble, there’s a romantic soundtrack playing and the lighting shifts to soft and candle lit.

If there is a second season, I’ll definitely watch it, because I need to know how the writers envisioned the ending. And despite my criticisms I did still enjoy watching ‘Vagabond’. I just think it could have used a better tempo and less or more subtle product placement.

Take a look at the trailer: 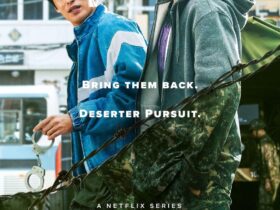